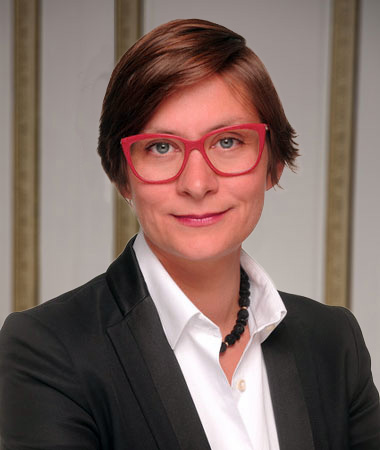 Carol Santoni joined SBKG & associés as a partner in September 2021.

For more than 20 years, Carol has assisted French or international real estate key players in their operations and more specifically, in investments (asset deals, share deals, joint ventures), in construction and development (including, property development contracts and partnerships between investors and property developers).

She also advises her clients in their asset management operations, including in commercial leases and in their restructuring and asset valuation projects.

For several years, Carol has been individually listed in the rankings Chambers and Best Lawyers.

sbkg & associés acts as counsel for lenders and borrowers in the setting up of real estate financing.

sbkg & associés capitalizes on its expertise in the drawing up and negotiation of sophisticated leases, management agreements and hotel operation contracts to help clients make the most of their asset portfolios.

This website uses cookies to improve your experience while you navigate through the website. Out of these, the cookies that are categorized as necessary are stored on your browser as they are essential for the working of basic functionalities of the website. We also use third-party cookies that help us analyze and understand how you use this website. These cookies will be stored in your browser only with your consent. You also have the option to opt-out of these cookies. But opting out of some of these cookies may affect your browsing experience.
Necessary Always Enabled
Necessary cookies are absolutely essential for the website to function properly. This category only includes cookies that ensures basic functionalities and security features of the website. These cookies do not store any personal information.
Non-necessary
Any cookies that may not be particularly necessary for the website to function and is used specifically to collect user personal data via analytics, ads, other embedded contents are termed as non-necessary cookies. It is mandatory to procure user consent prior to running these cookies on your website.
SAVE & ACCEPT